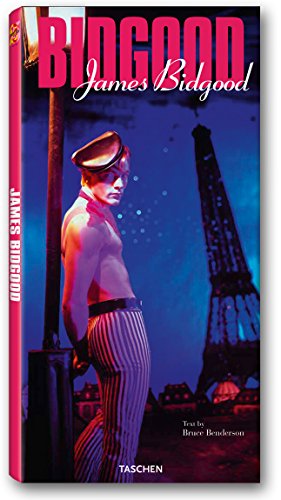 This is TASCHEN's 25th anniversary - special edition! Glamourama - the original camp portraitist. James Bidgood is seen as father of the pulp and glamour aesthetic, yet his photographic works are still scarcely known. He came to New York in 1951, intent on becoming a musical star, and earned his first wages as a drag performer in Manhattan's legendary Club 82. His 'serious' employment as a window-dresser, freelance photographer, and costume designer enabled him to collect the materials he needed for his own photo-shootings. On the side, he worked from 1963 to 1967 for Joe Weider's "Physique" magazines. In his photographs and films he pays cinematic homage to the youthful male body, in elaborate stagings of his romantic shimmering visions of a homoerotic paradise. He built the complicated sets for almost all his productions in his own tiny apartment, living for weeks on end in bizarre dream worlds. Even his film "Pink Narcissus", that stands as the masterpiece of camp culture, was made there. This book, a new edition of the first monograph on James Bidgood, presents a complete overview of his work, revealing an artist whose productions have at last come into their own in these times of Pierre & Gilles and the glamour revival.