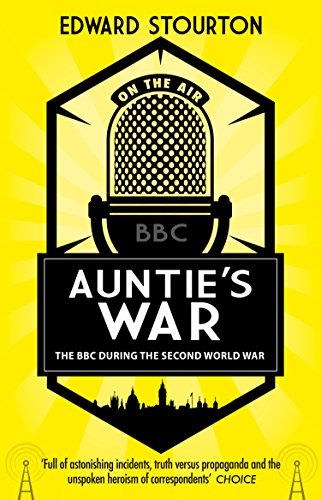 "An engaging, balanced and thoroughly researched history. It is often a moving and amusing tale containing plenty of mavericks and colourful episodes." (Lawrence James, The Times)

Auntie's War is a love letter to radio.

The British Broadcasting Corporation is a British institution unlike any other, and its story during the Second World War is also our story. This was Britain’s first total war, engaging the whole nation, and the wireless played a crucial role in it. For the first time, news of the conflict reached every living room – sometimes almost as it happened; and at key moments:
- Chamberlain’s announcement of war
- The Blitz
- The D-Day landings
- De Gaulle's broadcasts from exile
- Churchill's fighting speeches

Radio offered an incomparable tool for propaganda; it was how coded messages, both political and personal, were sent across Europe, and it was a means of sending less than truthful information to the enemy.

Edward Stourton is a sharp-eyed, wry and affectionate companion on the BBC’s wartime journey, investigating archives, diaries, letters and memoirs to examine what the BBC was and what it stood for. Auntie’s War is an incomparable insight into why we have the broadcast culture we do today.

A BBC RADIO 4: BOOK OF THE WEEK