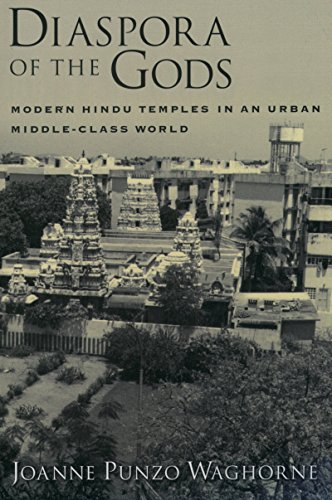 Many Hindus today are urban middle-class people with religious values similar to those of their professional counterparts in America and Europe. Just as modern professionals continue to build new churches, synagogues, and now mosques, Hindus are erecting temples to their gods wherever their work and their lives take them. Despite the perceived exoticism of Hindu worship, the daily life-style of these avid temple patrons differs little from their suburban neighbors. Joanne Waghorne leads her readers on a journey through this new middle-class Hindu diaspora, focusing on their efforts to build and support places of worship. She seeks to trace the changing religious sensibilities of the middle classes as written on their temples and on the faces of their gods. She offers detailed comparisons of temples in Chennai (formerly Madras), London, and Washington, D.C., and interviews temple priests, devotees, and patrons. In the process, she illuminates the interrelationships between ritual worship and religious edifices, the rise of the modern world economy, and the ascendancy of the great middle class. The result is a comprehensive portrait of Hinduism as lived today by so many both in India and throughout the world. Lavishly illustrated with professional photographs by Dick Waghorne, this book will appeal to art historians as well as urban anthropologists, scholars of religion, and those interested in diaspora, transnationalism, and trends in contemporary religion. It should be especially appealing for course use because it introduces the modern Hinduism practiced by the friends and neighbors of students in the U.S. and Britain.